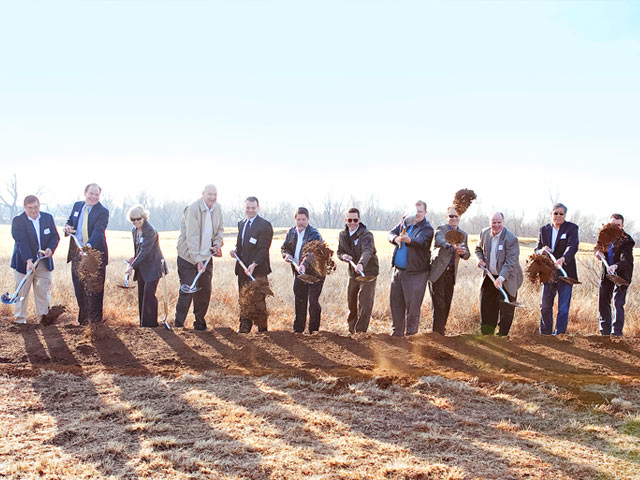 (The Colony, TX—January 24, 2013) With a beautiful backdrop of Lake Lewisville to the west, and The Tribute Golf Links clubhouse to the east, 15 city and state officials with shovels ceremoniously broke ground on the new Tribute Shoreline Nature Trail Thursday morning.

“This latest nature trail is another indication of the commitment that our city has to preserving the natural beauty of the land and in providing our residents and visitors with unique opportunities to enjoy the attraction of the lake with the benefit of fitness,” said Mayor McCourry.

The project represents a unique public/private partnership, and a culmination of three years of planning to create a new scenic hike and bike trail for residents of The Colony, as well as those residing in The Tribute master planned community. The undertaking was not an easy one, involving extensive research with The Colony Parks & Recreation Department, the U.S. Army Corps of Engineers and a grant from the Texas Parks & Wildlife Department.

“We are fortunate to have an excellent partnership with the U.S. Army Corps of Engineers for use of almost 2000 acres of federal land on the east side of the lake for public recreational uses, and are honored to be the first city in the United States for which the Corps of Engineers agreed to lease Wildlife Management Land to give the public better access to the lake and nature areas,” said Pam Nelson, Community Services Director for The Colony Parks & Recreation Department. “The combined partnership between The Colony, Tribute Partners, Texas Parks and Wildlife, and the Corps, is an exceptional and unique arrangement allowing this new trail system to truly highlight the natural features and wildlife of an untouched peninsula on Lake Lewisville.”

Matthews Southwest designed and JBI Partners engineered the two-and-a-half mile, 10-foot wide environmentally sensitive trail beginning near the Old American Golf Club on Lebanon Road, in the city of The Colony. The trail system, constructed on U.S. Army Corps of Engineers property, will traverse through a portion of the Old American Golf Club and the Wynnewood Peninsula. The tip of the peninsula will feature a scenic overlook of Lake Lewisville with picnic tables, benches and lake access for pedestrians and bicyclists.

Trail amenities will include benches and trash/recycle receptacles at selected areas, directional signage, mileage markers throughout the trail system, and interpretative signage describing cultural and native features of the lake and surrounding area. Future amenities will include additional lake overlook areas and a fishing pier.

The trail materials and proposed trail routes were carefully selected to minimize impact on the surrounding natural environment, both during and after construction. Care was taken during the planning process to minimize disturbance to the native vegetation and to protect large tree stands and the designated Wildlife Habitat area. All project areas disturbed as a result of construction will be re-established with a mix of native grasses and plants. Recycled materials are being used in the site furnishings where possible.

“To be able to enjoy the natural beauty of this area, we needed to create a trail that doesn’t take away from the habitat,” said Jack Matthews. “That means preserving the tree canopy for birds, protecting the wildlife and safeguarding the terrain; all while allowing for the passage of people through a completely sustainable use of trail materials.”

The Colony City Council awarded the construction of the trail project last Tuesday, January 15, to CPI Civil. Construction is expected to start in early February with a completion date anticipated for the fall of 2013.

About The Tribute
Located in The Colony on a Lake Lewisville peninsula one mile west of FM 423 on Lebanon Road, The Tribute (www.thetribute.com) is a 1,600 acre master planned community that will include more than 2,000 homes ranging in price from $270,000 to over $1 million at build out. The Tribute will also feature condominiums and upscale apartments. The Tribute boasts two 18-hole awarding winning golf courses with club houses and more than 200 acres of natural open space with a trail system and canals.

While economic growth is a major focus of the City of The Colony, the family oriented and safe environment remains top priority. Being centrally located in the region, The Colony has much to offer prospective businesses, visitors and residents. Quality housing, educational opportunities, cultural events, recreation and family friendly activities are among the leading city features. Service organizations and volunteer opportunities are available for citizens to become involved in the community. Additionally, there are many wonderful parks, trails and activities available to enjoy year round. The City of The Colony is extremely proud of the quality of life it offers to the local community.