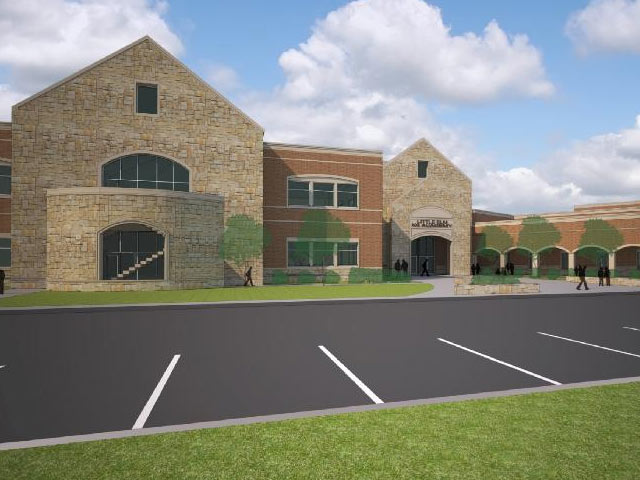 The Little Elm ISD Board of School Trustees approved the final design development documents for the K-8 STEM Academy plans to build the district’s first Science, Technology, Engineering and Math (STEM) Academy at The Tribute lakeside golf and resort community in The Colony, currently under development by Matthews Southwest.

The district will break ground on the facility in August 2013 and the campus will open to students for the 2014-2015 school year. The STEM Academy will provide students in kindergarten through eighth grades a unique opportunity to build a strong foundation in subjects that are increasingly important in today’s technology-dependent society.

“This building is possible because of the monetary partnership with Matthews Southwest,” said Lynne Leuthard, superintendent of schools. “The unique design of this campus will provide the framework of innovative instruction for our students.”

A partnership between the district and Matthews Southwest, developer of The Tribute, made possible the issuance of $15 million in new bond debt to fund construction of the STEM Academy.

The 80,000 sq. foot facility will be situated on a 31-acre track of land the district purchased in 2002. The exterior of the campus will mirror key characteristics of The Tribute development, as it pairs brick and stone to accent the existing amenities of the neighborhood.

The entry area to the campus will serve as a centralized meeting area with a “staired” space for seating. This space will also be used for multi-purposes and informal gatherings. It will be tucked beneath a sweeping, circular stairway that will connect the first and second floors.

Flexible learning spaces will divide grade levels into “houses” rather than traditional hallways lined with classrooms. Collaborative areas will inspire students to work on projects and facilitate the shift in instruction to project based learning.

Design documents do not include a traditional library; rather each “house” will have a common center for resource and reference materials for direct access. All of the “houses” will be connected by a two-story atrium for school-wide meetings that can also be used to facilitate small group instruction.

Students on campus will have wireless access to technology alongside their counterparts at other Little Elm ISD schools. In April, the Board authorized spending an additional $500,000 on Phase II of the district’s Digital Learning Initiative that will provide Google Chromebook laptops to middle school students for the 2013-2014 school year. Under Phase I, all Little Elm High School students were issued MacBook Air laptops for their instructional use.

The STEM Academy Project was designed by SHW Architects and Pogue Construction will be the contractor.