Ready for an eagle’s landing 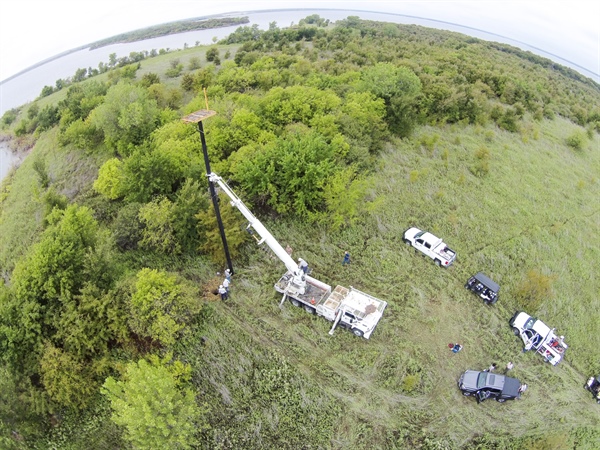 From The Colony Courier-Leader
by Penny Rathbun

The eagle has landed…wait…not quite yet.

This is what The Colony resident Tom Woeste hopes will happen soon at one or both of the two new platforms atop two 40-foot poles erected along The Tribute Shoreline Nature Trail on Sept. 28.

Woeste has long had a particular passion for the bald eagle, the bird that is a national symbol for the United States and the only eagle native to North America. But there are no eagles in The Tribute area where he lives.

He had seen a video about how an eagle’s nest in Arizona had to be removed and destroyed because of an infestation of ticks. An artificial nesting place was constructed for when the eagles returned the next year. The feathered friends took to the new nest and continued to return year after year. This gave him an idea. Woeste is a vice president at the Turner Construction Company.

“We created a place for eagles, but ospreys or another bird may nest there,” he said.

The city of The Colony owns the land on which Wynnewood Park sets and contains the area know as The Tribute.

Representatives from Texas Parks and Wildlife and the Army Corps of Engineers determined where the poles should be placed. CoServ provided the two 40-foot poles, the crew and equipment to set them in the ground once the platforms were built. The Frisco Lumber Company provided the building materials for the platforms, and Frisco Boy Scout Troop 298 built the large platforms. Volunteers gathered sticks and other materials to put together pre-fab nest kits that have been left on the platforms for the future tenants. The platforms must be substantial because an eagle’s nest can weight as much as  a ton or more. Raptors refurbish and expand the nest year after year, and the nest just keeps getting bigger and bigger.

The platforms have also been built with camera mounts so that the lives of whoever chooses to build a home on the platforms can be broadcast online.

If eagles move in they will show up in late October. They will lay eggs in January. Eggs hatch in about 36 days, and eaglets fly away in about 10 weeks.

“This has been done with no cost to the city or taxpayers. Some families have donated,” Woeste said.

“I hope future generations get to enjoy this,” Weoeste said. “I get to name the first baby.”

He already has names picked out for the first hatchlings but declined to reveal them.