Category: In the News, Uncategorized 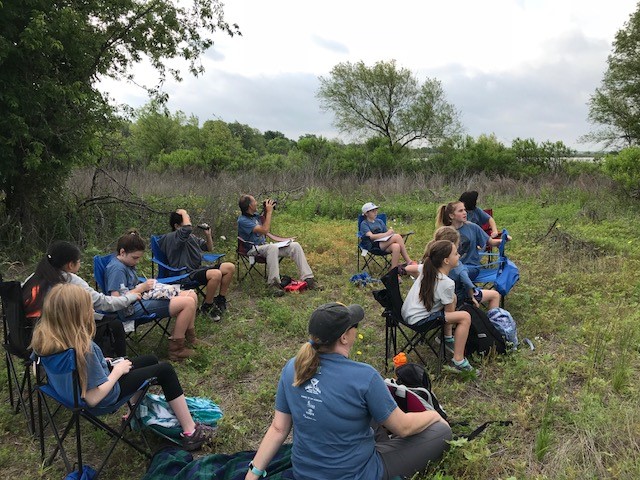 The world’s biggest, longest, and wildest birdwatching tournament in the U.S. took place April 15 – May 15, 2018, and for the first time included two birding teams represented by the City of The Colony and The Tribute Owners Association. The teams, made up of both novice and expert birders, competed in two different categories while enjoying the spring migration in Texas.

The Tribute Eagle Eyes participated in the all ages “Big Sit” category along The Tribute Shoreline Nature Trail and took third place in the Prairies and Pineywoods West region by identifying 19 different species. The team consisted of a Girl Scout troop, all 13 years old and younger, along with several adults. Greg Tonian, Texas Master Naturalist, mentored the team. Teams competing in the “Big Sit” category were required to select a 17-foot diameter circle from which to bird within one twenty-four-hour period. Birds identified and counted had to be seen or heard from within the circle. The Tribute Eagle Eyes created their circle between the Shoreline Nature Trail and Lake Lewisville.

The adult Tribute Trailblazers team participated in the all ages “Texas Two-Stop Tournament” and placed fifth state-wide by identifying 40 species. Donna Cole, Texas Master Naturalist, mentored the team. Teams competing in the “Texas Two Stop” were required to select two birding sites with distinct boundaries and could bird for up to 24 consecutive hours at each site in a 48-hour period. The final checklist was the total combined list for both sites. The Tribute Trailblazers selected The Tribute Shoreline Nature Trail and The Colony Shoreline Trail as their two stops.

Both teams utilized binoculars and various bird books to identify birds during this fun and educational tournament.